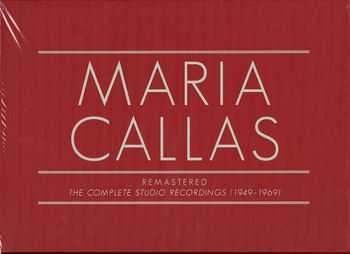 The epitome of the operatic diva, the American-born Greek soprano is recognised as a singer who defined, and even redefined opera in the 20th century and she has never lost her place among the worlds top-selling classical artists. With the release of CALLAS REMASTERED: The Complete Studio Recordings, opera lovers will now be able to hear her as never before. Warner Classics is now the guardian of Maria Callas official recorded catalogue, and this 69-CD deluxe box set contains all the studio recordings that she made for both EMI/Columbia and the Italian label Cetra between 1949 and 1969. Each recording has been painstakingly remastered in 24-bit/96kHz sound at Abbey Road Studios using the original tapes, and the entire collection has been curated with the greatest of care. A true collectors edition, CALLAS REMASTERED presents each individual opera or recital CD in its original artwork. It also contains a 136-page hard-back book with essays, a biography and chronology, rarely-seen photos and reproductions of revealing letters written by Maria Callas, Walter Legge and other EMI executives. The opera librettos and aria texts are provided on a CD-ROM.